At Le Village Pop, we spend a lot of our time putting the spotlight on musicians who have less exposure … Sometimes we can see the objective reasons for these obscure places, but often we don’t understand why these artists don’t have a more established audience … And it’s the case again this week with our first Album of the Week, “Still Life With Machine Gun” by the English band My Glass World … After having worked with Paul Weller in The Jam and then in the Style Council, Jamie Telford, the creative and driving force behind this project, presents us this Friday with My Glass World’s 4th album and it’s a little gem of classy pop writing that in a perfect world should be able to gather everyone from “7 to 77 years old” … A song like “Everything Must Go”, that all the radios in the world should program immediately, with its rather crashing start and its masterful end with all the brass, could be the perfect summary of this union between Steely Dan and The Style Council … Add to that a voice all in roundness and contained lyricism and you get an album born to be a “classic”… And as we always say in the Village Pop, better a great “classic” album that is complete and successful than a “modern fake” one that is overrated … As we say ! … Enjoy ! . 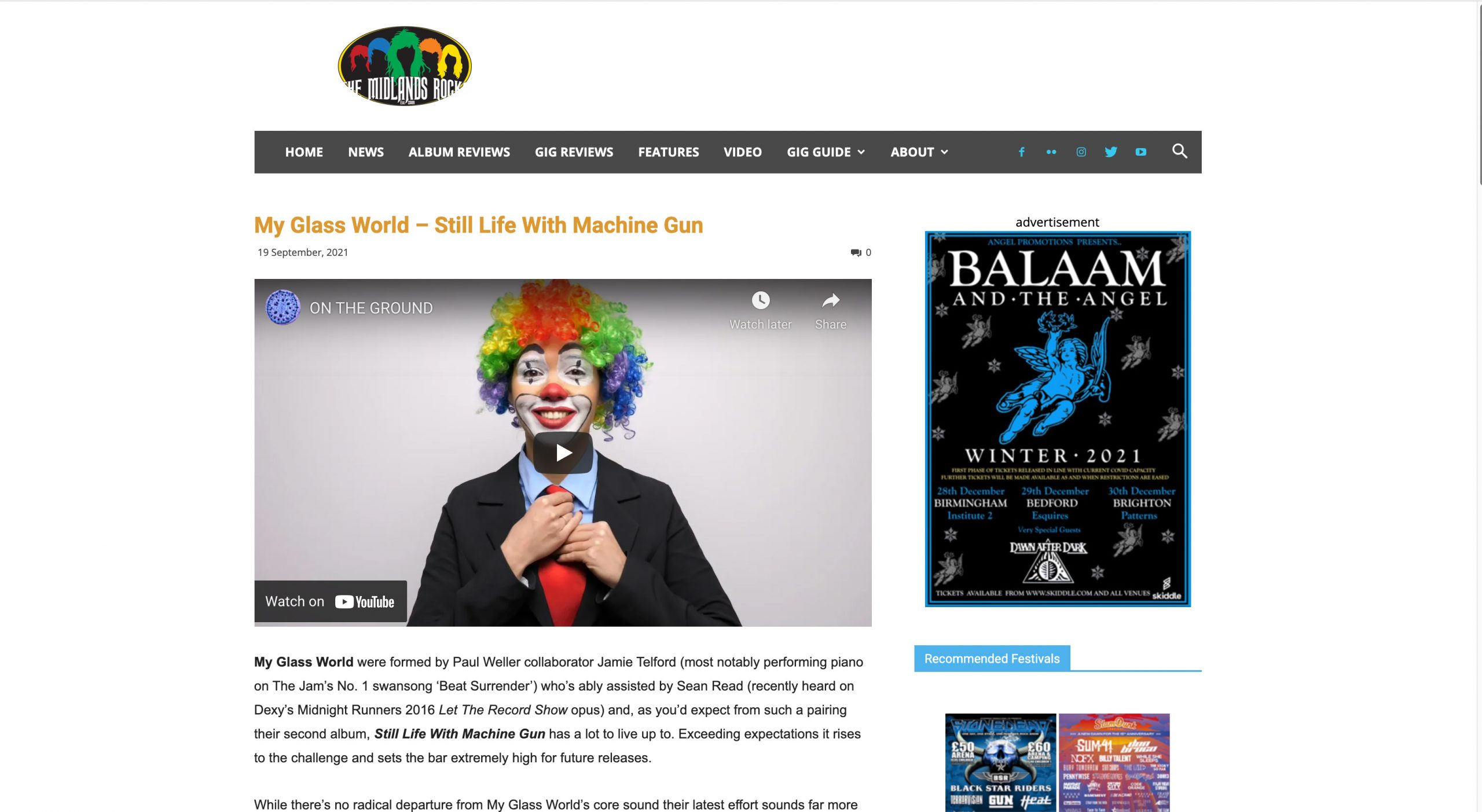 The Midlands Rock: review by Peter Dennis
“My Glass World are a band who defy easy categorisation and they pull a wide range of influences into their orbit and it’s to their credit that Still Life With Machine Gun doesn’t sound cluttered or overtly eclectic. There’s a deep lyrical thoughtfulness here (and throughout the whole album) which jars nicely with the up-tempo songs and renders Still Life With Machine Gun an intriguing listen. Exceeding expectations it rises to the challenge and sets the bar extremely high for future releases.”…
http://www.themidlandsrocks.com/my-glass-world-still-life-with-machine-gun/

A completely new name to me, I have to admit, I was drawn to this release by the interesting sounding title. ‘Still Life With Machine Gun’ is one of those marvellously off-kilter phrases which piques the interest, and even the band name My Glass World is sufficiently thought-provoking to make one wonder whether this is going to be some kind of earnest prog rock album. Well, wonder no more. It isn’t. Not at all. What it IS, however, is a very enjoyable listen to say the least, even if it is a little difficult to pin down in terms of genre.

Essentially, My Glass World is a duo, with Scottish songwriter Jamie Telford joined by another multi-instrumentalist Sean Read, but there is a small cast of other supporting musicians joining the pair in what amounts to a sort of collective rather than a band as such. Kind of a modern-day, UK Steely Dan, in a way. At least, in terms of the collective structure, but not so much the music. If I was to pick one name as a sort of comparative touchstone to this material, it would perhaps be Graham Parker, whose sharp, tight songs recorded with The Rumour find something of a resonance in many of the punchy, soulful and often lyrically acerbic tracks here. Nowhere is this more evident than the strident opener On The Ground, with Read’s horns accentuating the Rumour comparison. The second and fourth songs, Everything Must Go and Step Right Up also score a home run in a similar ballpark, but of the most note to me is the third track, an unexpected cover of Bowie’s Ashes To Ashes, which is astonishingly effective in the way it deconstructs the original and, shorn of the dated early ’80s production tricks that the original is slightly hampered by, manages to tease the lyric out to greater effect, and in many ways unwraps the song’s true potential. It’s one of the best Bowie covers I’ve heard, for sure. The handgun / gun control message of the title track and the lyrically powerful When Everything Closes are another pair of winners, though it must be said that the album is slightly front-loaded with much of the best material, as later songs like The Kings Of Everything and Another Piece Of Plastic don’t have quite that same sharp focus.

Having said that, however, the album closes on a real high with the final, eleventh track, the fascinatingly named Half Of The Known Universe Is Missing, Genuinely uplifting and brilliantly arranged, the song sees the album off with a major triumph, encouraging the listener (or at least this one) to start again and see what other delights the songs may begin to reveal. In the final analysis, the track sequencing works extremely well from that point of view. 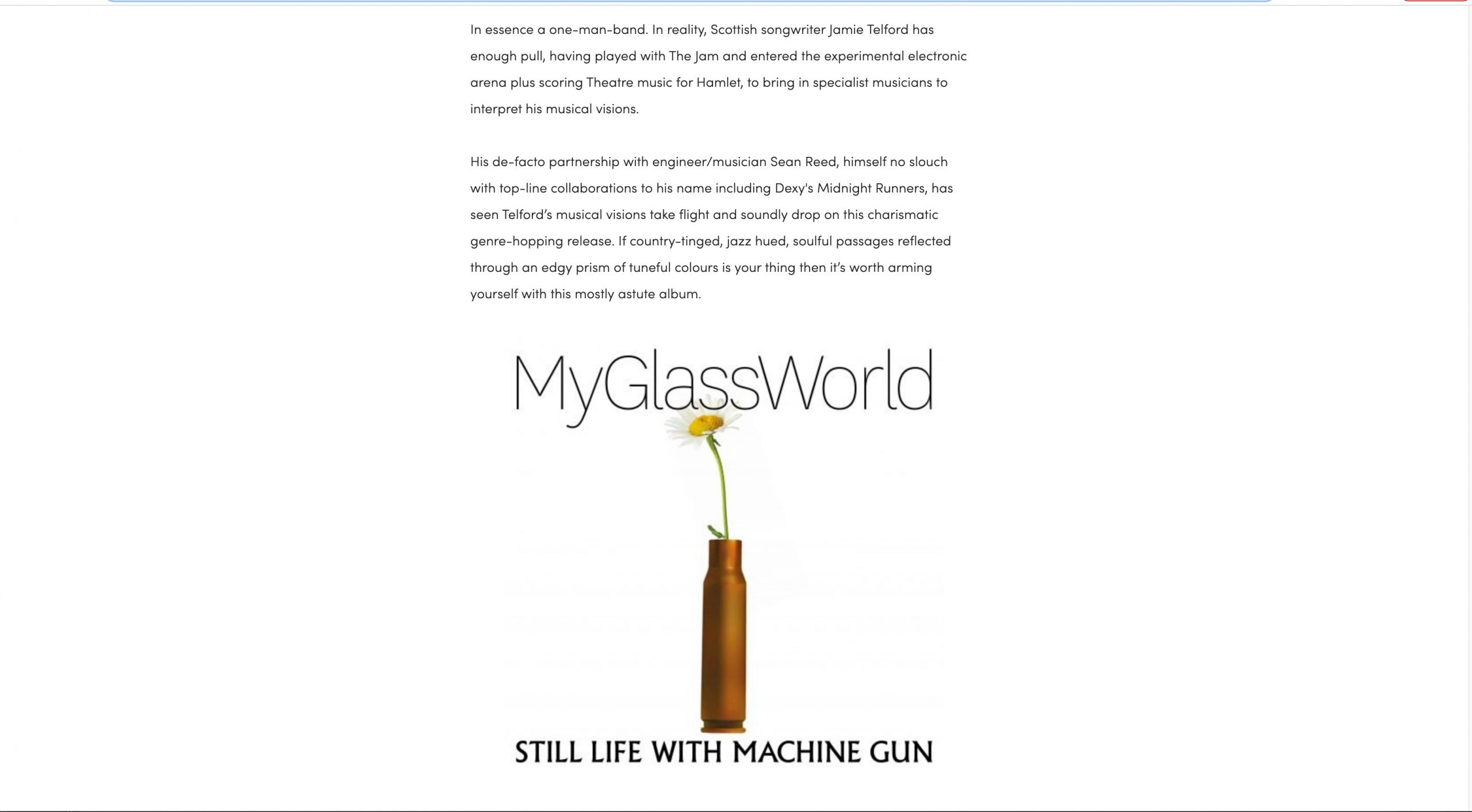 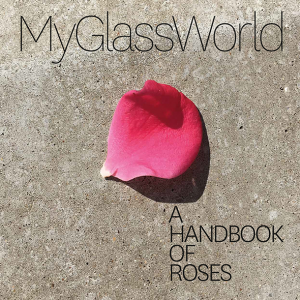 London – based Scotsman Jamie Telford is a bit of a musical polymath. He was responsible for the piano on The Jam’s number one single “Beat Surrender”. He’s scored Theatre Music for a world tour of Hamlet, composed classical pieces and created soundtracks for films. Meanwhile, My Glass World reflects his work as a singer-songwriter, supported by a cast of guest musicians.

For A Handbook of Roses, My Glass World’s fourth album, he’s teamed up with engineer, producer and musician Sean Read (Edwyn Collins, Dexys Midnight Runners, The Rails, Beth Orton). Telford and Read made the record in under two months at Reads studio Famous Times in Hackney, London.

There’s an impressive list of collaborators on the record – Telford describes them as being able to “play really well and turn on a sixpence” – including two stand up base players Jonny Bridgwood (Morrissey, Marianne Faithfull) and Ali Friend (Red Snapper) as well as guitarist Ted Barnes (Beth Orton) and drummer Stephen Gilchrist (Graham Coxon). In addition to his production duties Read plays keyboards, sax and trumpet and sings backing vocals.

Telford’s Scottish roots have influenced the album – several of the songs are about memories, recapturing lost feelings and going back to places in your past. His lyrics are powerfully evocative as he believes you can shift the people think with the right song and lyric.

The gorgeous opener, which is the title track, sets the mood for most of the album; a stately, yet melancholy country-soul tinged ballad about lost love, with piano, strings, saxophone, Hammond Organ, and some subtle electric guitar licks played on telecaster by Ted Barnes.

Broken Trains occupies similar territory. It’s a poetic, nocturnal tale of trying to get home from the city and travelling ‘past hungry rivers, and empty houses. Bungalows and silent churches, fallen bridges, and new substations. Cold roads and old vibrations.

On the infectious ‘The Number one Dude in Town’ which also has a 70s US singer songwriter feel, as well as glorious Stax like horns, Telford lampoons Donal Trump – “Still the fandango of your hair blows soft, your tan won’t fade, how hard they scoff”

The anthemic ‘Old Times’ is moving, nostalgic and yearning – “Old Times are calling, hauling you home again, back where three rivers meet” Another ballad, with a slightly folky feel and a lovely string arrangement, and it sounds like it should be sung in a pub at closing time.

‘Loves not a Four Letter Word’ is one of the more surprising songs on the album – moody, cinematic and jazz infused. Read provides cool, late night trumpet, Telford plays some chaotic piano and Pat Goroll lays down the ‘Stratocastro distort guitar.’
The final track, ‘Kettle., Pot and Bloody Black’ is minimalist, haunting and very atmospheric, with echo- laden vocals, spacey sounds and ghostly piano: “Days turn dry, and leaves float past. Birds fly off, the light goes fast. These shadow years, we don’t look back – into the dark and bloody black.’

Reads production gives these songs a real depth and warmth. There’s also an intimacy to the recording – it’s a perfect soundtrack for the wee small hours of the morning.  Speaking about his music, Telford says “ You can listen to something from 40 years ago and it still works – it still sounds right. That’s the area I am looking to work in – making it sound right, simply or with more complexity rather than worrying as to whether it sounds current.’

He needn’t worry – with A Handbook of Roses he’s made a superb and classy album full of great songs with a timeless quality. SH 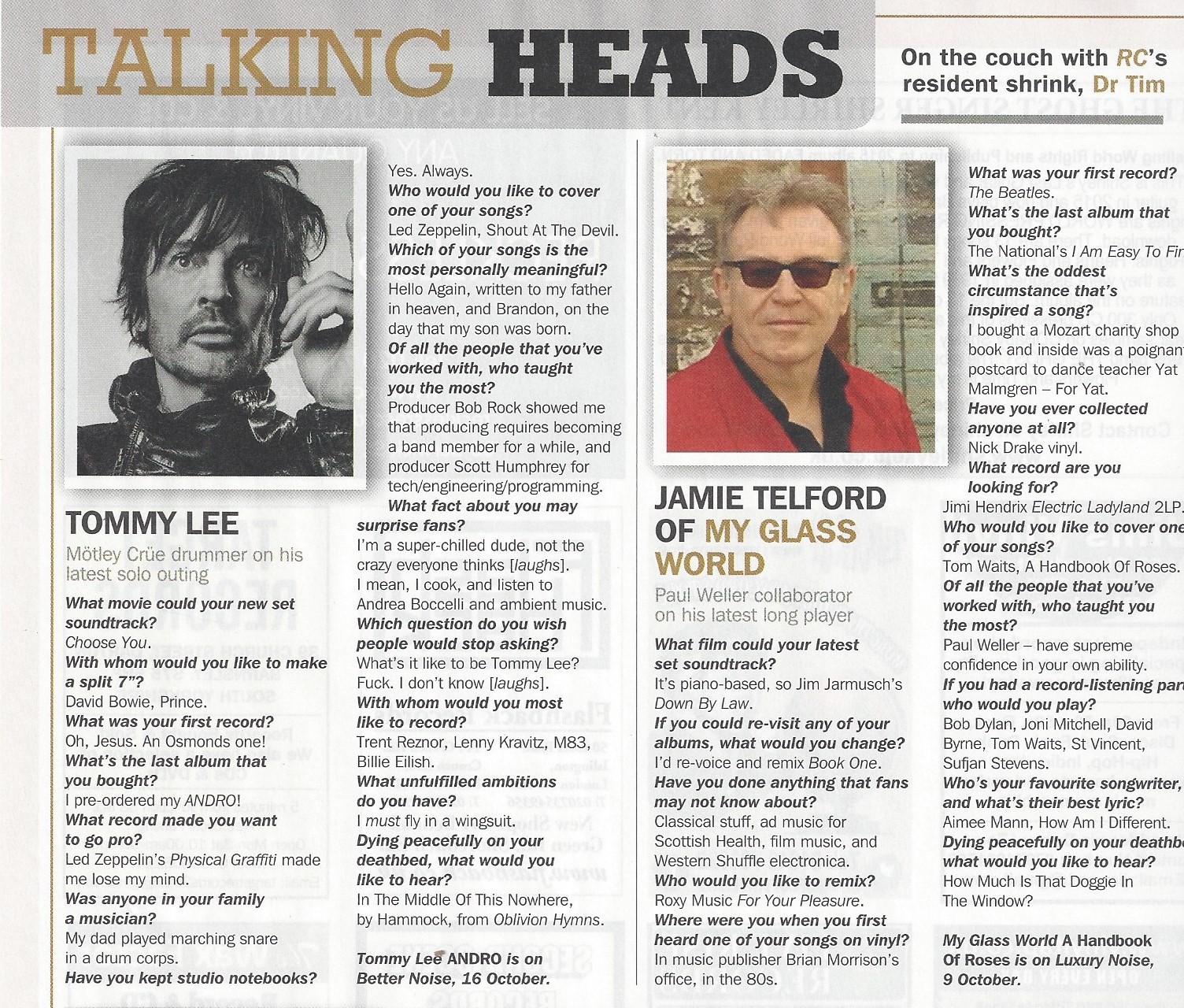 Good quality adult pop is thinly occupied territory. Adele heads the female list and Paul Heaton the male by some margin but to that list could well be added keyboard player and songwriter Jamie Telford.

Operating under the band name of My Glass World Telford has produced this ten track album (plus a hidden one) of atmospheric and somewhat melancholy songs that cover grown up concerns rather than merely boy-meets-girl-loses-girl tropes.

The backing musicians appear sensitive to the nuances of the material and don’t overwhelm the songs, allowing Telford and his piano to be the main focus.

Don’t expect a lively romp, what you have here is a thoughtful collection of slightly world weary songs that bear serious listening and appreciation.

“The album encompasses the amalgamation of fun and ambitious music that My Glass World are creating.”

Get Ready to Rock

It’s a move up from 2018′s Prisoner of Gravity, which we said was an album “of rare depth and quality”. As is Still Life With Machine Gun, only more so. To depth has been added width. Having now exposed his undeniable song craft to outside influences, Telford might just have found the right combination.

Exceeding expectations it rises to the challenge and sets the bar extremely high for future releases and renders Still Life With Machine Gun an intriguing listen. This album is the musical equivalent to the yin and yang; it’s fire and ice and captures both the calm and chaotic nature of life.

Keyboard notes as crystal sharp as splinters of glass. Gentle ripples of easy-paced tones. Blue-remembered paths of melody, deep rooted as trees, with a whole wide world reflected inside. A glass menagerie of songs, with classy classicism of piano, in clear separation yet in exact fusion, with haiku-neat lyrics of enigmatic depths that suggest more than their surfaces deliver. Open, but intimate and personal too.

My Glass World – or MyGlassWorld – is essentially Jamie Telford, who once played piano on The Jam’s ‘Beat Surrender’. And this is his third album – Following the cold fusion of Book One (2012) and the esoteric themes of The Year Of HAPPY (2013). Just don’t ask about the Moomin project!

Every now and then there’s a sense of Clifford T. Ward fly-away vocals, on videos shot on iPhone. John Kensingtons’s stand-up bass and jazz-light swirls break free of gravity, bending time on the title song, precisely punctuated by Martyn Kaine’s unobtrusive drumming. If Jamie Cullum is hunting songs to cover, look no further, they’re here. Prisoners Of Gravity closes with the frisson of doomy existential reflections in ‘The World Is A Hoax. 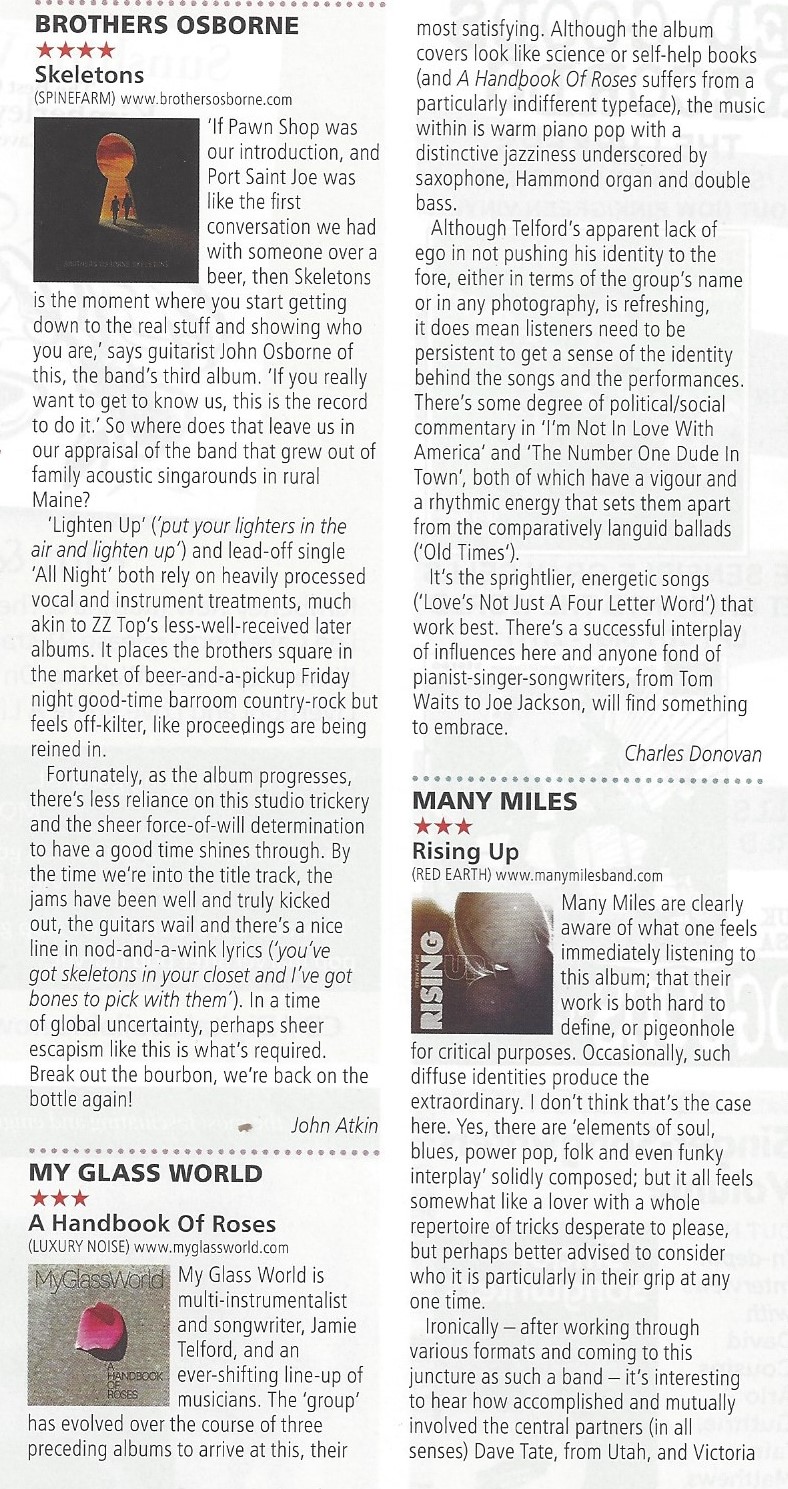 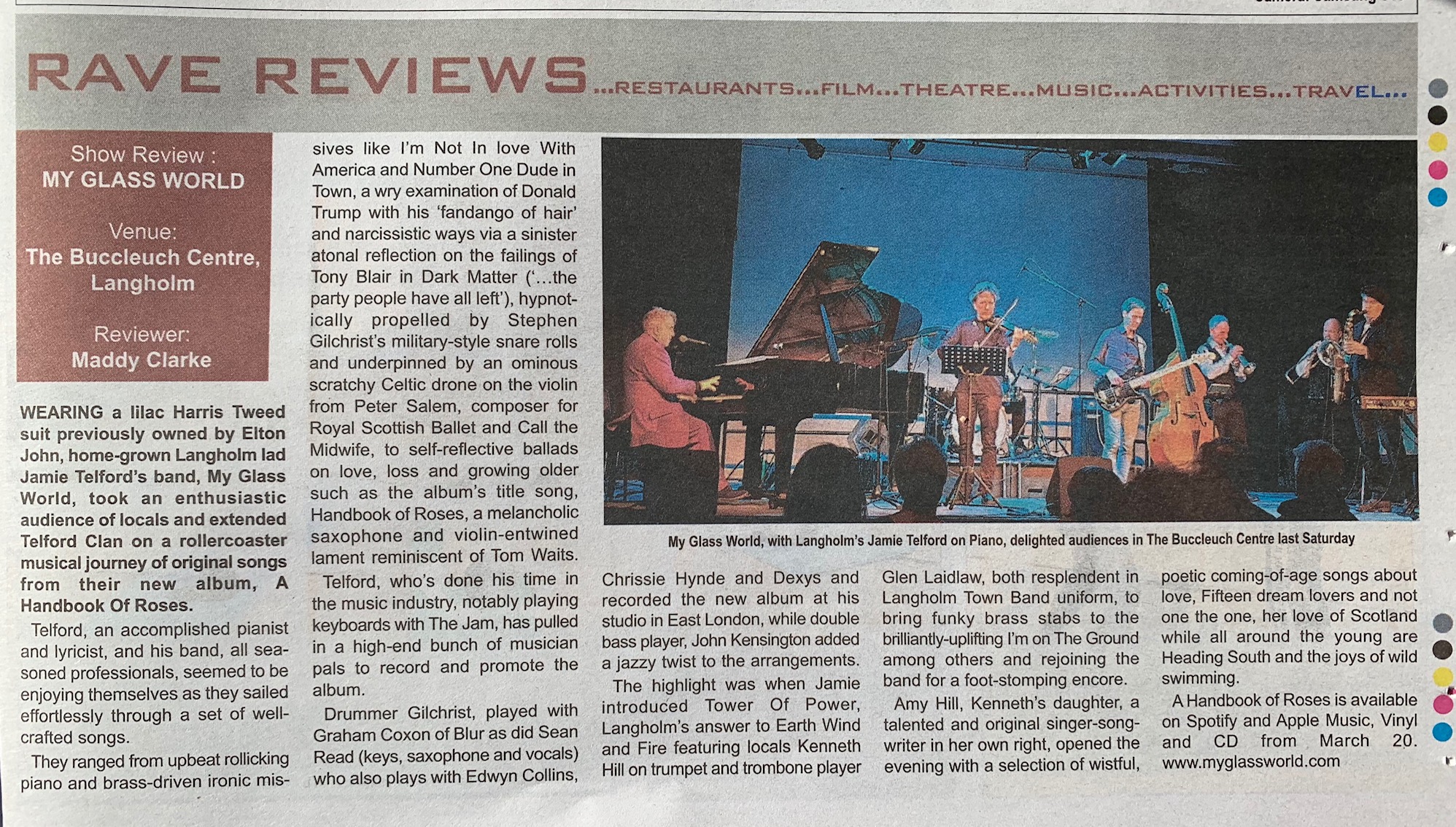 Review by Maddy Clarke of gig on Saturday 29 February at The Buccleuch Centre
with local star Amy Hill
www.buccleuchcentre.com 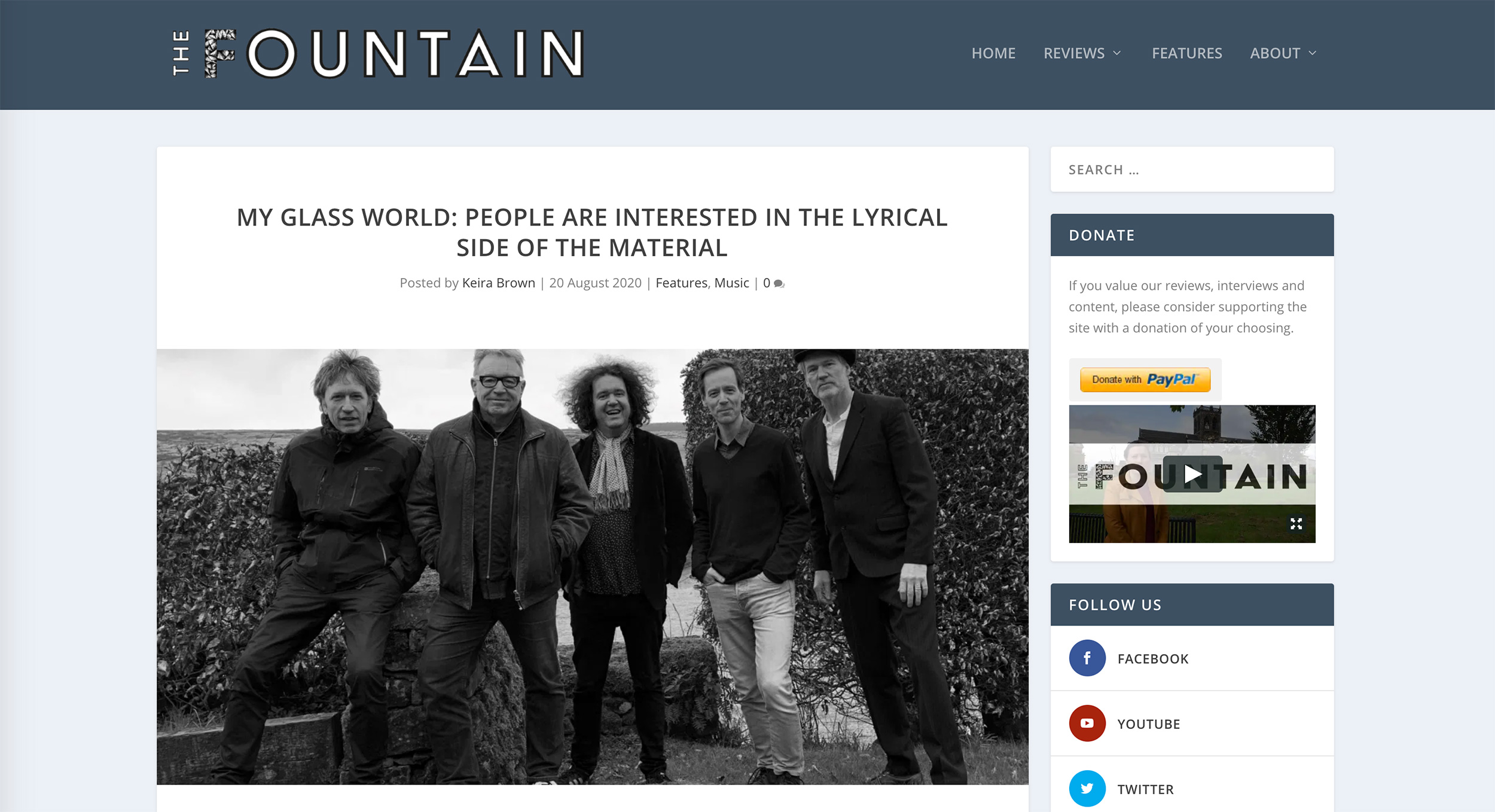 Read the review in The Fountain posted by Keira Brown https://thefountain.eu/features/2020/08/my-glass-world-people-are-interested-in-the-lyrical-side-of-the-material/